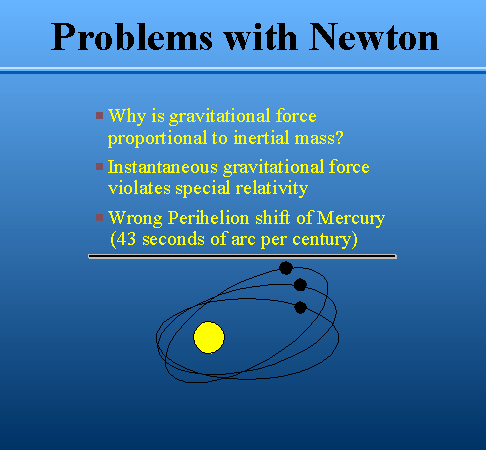 Apart from the difficulty discussed in IN WHAT RESPECTS ARE THE FOUNDATIONS OF CLASSICAL MECHANICS AND OF THE SPECIAL THEORY OF RELATIVITY UNSATISFACTORY?, there is a second fundamental difficulty attending classical celestial mechanics, which, to the best of my knowledge, was first discussed in detail by the astronomer Seeliger. If we ponder over the question as to how the universe, considered as a whole, is to be regarded, the first answer that suggests itself to us is surely this: As regards space (and time) the universe is infinite. There are stars everywhere, so that the density of matter, although very variable in detail, is nevertheless on the average everywhere the same. In other words: However far we might travel through space, we should find everywhere an attenuated swarm of fixed stars of approximately the same kind and density.

This view is not in harmony with the theory of Newton. The latter theory rather requires that the universe should have a kind of center in which the density of the stars is a maximum, and that as we proceed outwards from this centre the group-density of the stars should diminish, until finally, at great distances, it is succeeded by an infinite region of emptiness. The stellar universe ought to be a finite island in the infinite ocean of space.

This conception is in itself not very satisfactory. It is still less satisfactory because it leads to the result that the light emitted by the stars and also individual stars of the stellar system are perpetually passing out into infinite space, never to return, and without ever again coming into interaction with other objects of nature. Such a finite material universe would be destined to become gradually but systematically impoverished.

In order to escape this dilemma, Seeliger suggested a modification of Newton’s law, in which he assumes that for great distances the force of attraction between two masses diminishes more rapidly than would result from the inverse square law. In this way it is possible for the mean density of matter to be constant everywhere, even to infinity, without infinitely large gravitational fields being produced. We thus free ourselves from the distasteful conception that the material universe ought to possess something of the nature of a center. Of course we purchase our emancipation from the fundamental difficulties mentioned, at the cost of a modification and complication of Newton’s law which has neither empirical nor theoretical foundation. We can imagine innumerable laws which would serve the same purpose, without our being able to state a reason why one of them is to be preferred to the others; for any one of these laws would be founded just as little on more general theoretical principles as is the law of Newton.

Experienced Machine Learning and Web development professional. 3 years industry experience. Graduated in 2018 with a B. S.c. in PHYSICS from Bayero University Kano, Ahmad has focused his professional career almost exclusively on Machine Learning and Web development. He is the CTO at ChinikiGuard More About me Here
THE SOLUTION OF THE PROBLEM OF GRAVITATION ON THE BASIS OF THE GENERAL PRINCIPLE OF RELATIVITY