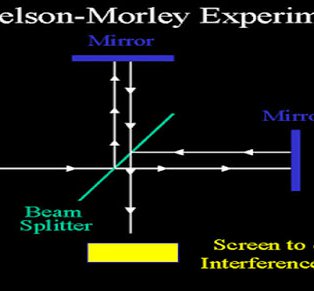 The Michelson-Morley experiment occupies a special niche in the pantheon of relativity. Contrary to many accounts, the experiment did not strongly influence Einstein's discovery of special relativity.l It nonetheless provides strong experimental underpinning for the theory and was instrumental in promoting its widespread acceptance. Albert A. Michelson's experiment was rooted in late-nineteenth-century ideas concerning the nature of light. I begin therefore with a brief exposition of those ideas.
That the speed of light is very great had been known for a long time. Galileo had tried to measure it but did not succeed. The first determination of the speed of light was obtained in 1676 by Ole Romer from his observations of the eclipses of one of Jupiter's moons. Because the earth-Jupiter distance changes, the interval between successive eclipses varies; the variation measures the time required for light to travel the additional distance. Romer's result for the speed of light, 2.2 X 10^8 m/sec, was about 25 percent low. 2 The best modern value is 2.998 X 10^8 m/sec.
During the eighteenth century a lively controversy raged over the question, Does light consist of tiny particles or is it a wave phenomenon? Expert opinion was divided; Newton, for example, favored the particle hypothesis. Many properties of light, such as reflection and refraction, can be explained in either view.
Strong evidence in favor of the wave hypothesis was provided by experiments performed by Thomas Young, Augustin-Jean Fresnel, and others, which showed that light exhibits interference and diffraction. These characteristic wavelike phenomena are well-nigh impossible to explain on the basis of a particle description. Although the wave character of light seemed firmly established by the early 1800s, the nature of the waves was not at all clear. The model favored at first was that light waves, like all other known waves, are a mechanical oscillation of some material medium. (A sound wave in air, for example, consists of longitudinal vibrations of air molecules.) The light medium was called the "luminiferous ether"; I shall refer to it simply as the ether.
The ether, if it exists, has quite unusual properties. It must pervade all space, even where no matter is present. (Unlike sound, light propagates readily through the best vacuum.) It must be extremely tenuous, in as much as the earth and all other astronomical bodies pass through etherfilled space with no detectable loss of speed. Finally, the ether must be capable of vibrating at extremely high frequencies. (The frequency of visible light is more than 10 14 cycles per second, much higher than that of any known mechanical oscillation.)
Important progress took place when James Clerk Maxwell showed that the equations of electricity and magnetism have solutions that consist of traveling waves, whose speed can be calculated in terms of known constants. The calculated speed of those electromagnetic waves turned out to be almost exactly equal to the measured speed of light. This was convincing evidence that light is in fact an electromagnetic phenomenon. After Maxwell's work, the mechanical model of light was abandoned. No material substance vibrates when an electromagnetic wave propagates; the oscillation is in the magnitudes of the electric and magnetic fields, which are only mathematical quantities. If no mechanical oscillation takes place, no medium is required. Most physicists were nonetheless unwilling to accept the notion that electromagnetic disturbances can propagate through an absolute vacuum. The ether thus lived on, viewed now as a medium that somehow "supports" the oscillations associated with the propagation of light even though it does not itself vibrate. The nature of that medium became even more mystifying.

Numerous attempts were made during the late nineteenth century to confirm the existence of the ether. The Michelson-Morley experiment is the best known of those attempts. The experiment is described in the next section; here I indicate its basic idea by sketching an analogous experiment using water waves. The discussion is entirely within the framework of Galilean relativity.
In a wave phenomenon that involves a medium, the rest frame of the medium is a unique frame of reference. Observers in any frame can carry out experiments to determine their velocity relative to the medium. Suppose a ship is at rest in still water. Observers on the ship measure the speed of water waves moving in various directions. Because the medium is isotropic (the water looks the same in all directions), the measured speeds must all be equal. Let c denote that common speed.
An identical experiment carried out on a moving ship has a quite different outcome: the wave speed in that case varies with direction. A wave traveling in the same direction as the ship moves more slowly than one traveling in the opposite direction. In fact, if the ship's speed is c, a wave traveling in the same direction as the ship does not appear to move at all. By measuring the speeds of water waves in all directions, then, ship-borne observers can determine the velocity of their ship relative to the water. The direction in which waves travel slowest must be the ship's heading, and the magnitude of the minimum speed is c - V, where V is the speed of the ship. If all waves are found to travel at the same speed, the ship must be at rest relative to the water.
The same argument can be applied to the propagation of light, with the ether in place of the water and the earth playing the part of the ship. In the rest frame of the ether light travels at the same speed c in all directions, whereas in the earth frame the speed of light should vary with direction; the magnitude of the variation depends on V, which now denotes the speed of the earth relative to the ether. Michelson proposed to determine the value of V by detecting the difference in travel times of light rays traversing a given distance in different directions.
One does not have to believe in the ether to conclude that the speed of light measured on earth should vary with direction. The Galilean velocity transformation implies that light can travel at the same speed in all directions only in one reference frame; we may call that the isotropic frame" if we are not committed to the existence of an ether. Unless the earth happens to be at rest in the isotropic frame (which is highly improbable a priori), the speed of light in the earth's frame must depend on its direction.