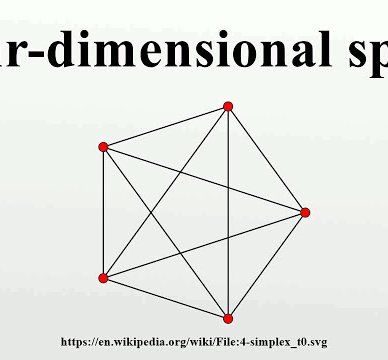 The non-mathematician is seized by a mysterious shuddering when he hears of “four-dimensional” things, by a feeling not unlike that awakened by thoughts of the occult. And yet there is no more common-place statement than that the world in which we live is a four-dimensional space-time continuum.

Space is a three-dimensional continuum. By this we mean that it is possible to describe the position of a point (at rest) by means of three numbers (co-ordinates) x, y, z, and that there is an indefinite number of points in the neighborhood of this one, the position of which can be described by co-ordinates such as x' , y' , z' , which may be as near as we choose to the respective values of the co-ordinates x, y, z of the first point. In virtue of the latter property we speak of a “continuum,” and owing to the fact that there are three co-ordinates we speak of it as being “three-dimensional.”

Similarly, the world of physical phenomena which was briefly called “world” by Minkowski is naturally four-dimensional in the space-time sense. For it is composed of individual events, each of which is described by four numbers, namely, three space co-ordinates x, y, z and a time co-ordinate, the time-value t. The “world” is in this sense also a continuum; for to every event there are as many “neighboring” events (realized or at least thinkable) as we care to choose, the co-ordinates x' , y' , z', t' of which differ by an indefinitely small amount from those of the event x, y, z, t originally considered. That we have not been accustomed to regard the world in this sense as a four-dimensional continuum is due to the fact that in physics, before the advent of the theory of relativity, time played a different and more independent role, as compared with the space coordinates. It is for this reason that we have been in the habit of treating time as an independent continuum. As a matter of fact, according to classical mechanics, time is absolute, i.e. it is independent of the position and the condition of motion of the system of co-ordinates. We see this expressed in the last equation of the Galileian transformation ( t ' = t ).

The four-dimensional mode of consideration of the “world” is natural on the theory of relativity, since according to this theory time is robbed of its independence. Moreover, according to this equation the time difference ∆t' of two events with respect to K' does not in general vanish, even when the time difference ∆t of the same events with reference to K vanishes. Pure “space-distance” of two events with respect to K results in “time-distance” of the same events with respect to K'. But the discovery of Minkowski, which was of importance for the formal development of the theory of relativity, does not lie here. It is to be found rather in the fact of his recognition that the four-dimensional space-time continuum of the theory of relativity, in its most essential formal properties, shows a pronounced relationship to the three-dimensional continuum of Euclidean geometrical space. 1 In order to give due prominence to this relationship, however, we must replace the usual time co-ordinate t by an imaginary magnitude −1 ⋅ ct proportional to it. Under these conditions, the natural laws satisfying the demands of the (special) theory of relativity assume mathematical forms, in which the time co-ordinate plays exactly the same role as the three space co-ordinates. Formally, these four coordinates correspond exactly to the three space co-ordinates in Euclidean geometry. It must be clear even to the non-mathematician that, as a consequence of this purely formal addition to our knowledge, the theory perforce gained clearness in no mean measure.

These inadequate remarks can give the reader only a vague notion of the important idea contributed by Minkowski. Without it the general theory of relativity, of which the fundamental ideas are developed in the following pages, would perhaps have got no farther than its long clothes. Minkowski’s work is doubtless difficult of access to anyone inexperienced in mathematics, but since it is not necessary to have a very exact grasp of this work in order to understand the fundamental ideas of either the special or the general theory of relativity.