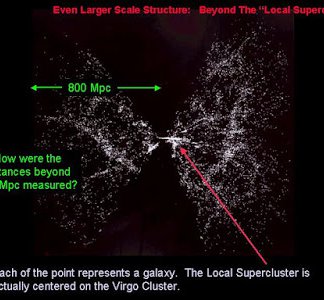 The Friedman world models are isotropic and homogeneous and so the enormous diversity of structure we observe in the Universe today is absent. The next step in developing more realistic models of the Universe is to include small density perturbations into the homogeneous, isotropic models and study their development under gravity. For the case of a stationary medium, this problem was solved by James Jeans in 1902 (Jeans, 1902). The criterion for collapse is that the size of the perturbation should exceed the Jeans’ length λ J = c s /(G 0 /π) 1/2 , where c s is the speed of sound in the medium and 0 its density. On scales greater than the Jeans’ length, the instability grows exponentially. The physical meaning of the instability criterion is that, on large enough scales, the gravitational force of attraction by the matter of the perturbation exceeds the pressure gradients which resist collapse.

The analysis was repeated for the case of an expanding medium in the 1930s by
Lemaître and by Richard Tolman for the case of spherically symmetric perturbations(Lemaître, 1933; Tolman, 1934) and the solution for the general case was found by Evgenii Lifshitz in 1946 (Lifshitz, 1946). Lifshitz found that the condition for gravitational collapse is exactly the same as the Jeans’ criterion at any epoch but, crucially, the growth-rate of the density perturbations is no longer exponential but only algebraic. For a Universe with the critical density, Ω 0 = 1 or 0 = 3H 0 2 /8πG, the density contrast Δ = δ / grows with time as Δ ∝ t 2/3 . The implication of this result is that the fluctuations from which the large-scale structure of the Universe formed cannot have grown from infinitesimal random perturbations. For this reason, Lemâitre, Tolman and Lifshitz inferred that galaxies could not have formed by gravitational collapse.

From the early 1960s onwards, other authors took the point of view that the
solution to the problem was to include finite perturbations into the model of the early Universe and then follow in detail how their mass spectrum would evolve with time. The Moscow school led by Yakov Zeldovich, Igor Novikov and their colleagues and James Peebles at Princeton pioneered this approach to the study of the development of structure in the Universe. If perturbations on a particular physical scale are tracked backwards into the past, at some large redshift, the scale of the perturbation is equal to the horizon scale, that is r ≈ ct, where t is the age of the Universe. In 1964, Novikov showed that, to form structures on the scales of galaxies and clusters of galaxies, the density perturbations on the scale of the horizon had to have amplitude Δ = δ / ∼ 10 −4 in order to guarantee the formation of galaxies by the present epoch (Novikov, 1964). These were certainly not infinitesimal perturbations and their origin had to be ascribed to processes occurring in the very early Universe.

The discovery of the Cosmic Microwave Background Radiation in 1965 had an
immediate impact upon these studies since the thermal history of the pregalactic
gas could be worked out in detail and this was essential in order to determine
how the speed of sound, and hence the Jeans’ length, varied with cosmic epoch. If there is no energy input into the background radiation, the temperature of the thermal background radiation changes with scale factor a as T = T 0 /a = T 0 (1+z), where z is redshift, exactly as in the adiabatic expansion of a photon gas. Therefore, at redshifts z ∼ 1500, the temperature of the radiation was about 4000 K, at which temperature there were sufficient photons in the Wien region of the Planck distribution to ionise all the intergalactic hydrogen. This epoch is referred to as the epoch of recombination and at earlier epochs the hydrogen was fully ionised; at a correspondingly earlier epoch, the primordial helium was ionised as well. Somewhat earlier than the epoch of recombination, the inertial mass density of the radiation was equal to the mass density of the matter, c 2 = aT 4 , and so, at times earlier than the epoch of matter and radiation equality, the dynamics of the Universe were radiation-dominated.

The coupling of matter and radiation by electron scattering was worked out by Ray Weymann in 1966 and in much more detail by Zeldovich and Rashid Sunyaev in 1969 (Weymann, 1966; Zeldovich and Sunyaev, 1969). The pioneering papers by Zeldovich and Sunyaev were based upon the theory of induced Compton scattering which had been published by Aleksander Kompaneets in 1956, long after this remarkable classified work had been completed (Kompaneets, 1956). What these papers showed was that, during the radiation-dominated epochs, the matter and radiation were maintained in very close thermal contact by Compton scattering as long as the intergalactic gas remained ionised. This enabled the speed of sound to be determined at all epochs before the epoch of recombination. Therefore, the evolution of the Jeans’ length and the mass of baryonic matter within this length, what is known as the Jeans’ mass, could be evaluated.