The Physics of Sound 1 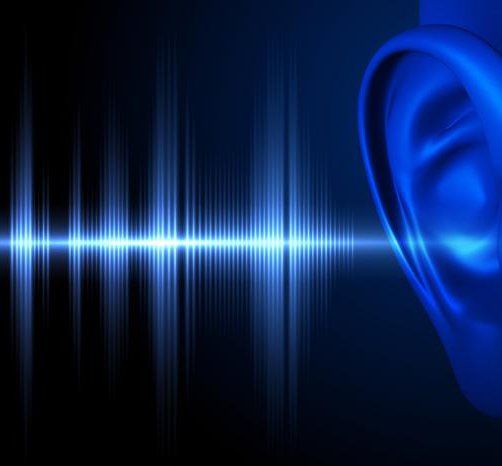 The Physics of Sound

Sound lies at the very center of speech communication. A sound wave is both the end product of the speech

production mechanism and the primary source of raw material used by the listener to recover the speaker's message.

Because of the central role played by sound in speech communication, it is important to have a good understanding

of how sound is produced, modified, and measured. The purpose of this chapter will be to review some basic

principles underlying the physics of sound, with a particular focus on two ideas that play an especially important

role in both speech and hearing: the concept of the spectrum and acoustic filtering. The speech production

various combinations of buzzes, hisses, and pops, and then filtering those sounds by making a number of fine

adjustments to the tongue, lips, jaw, soft palate, and other articulators. We will also see that a crucial step at the

same way that a prism breaks white light into components of different optical frequencies. Before getting into these

ideas it is first necessary to cover the basic principles of vibration and sound propagation.

A sound wave is an air pressure disturbance that results from vibration. The vibration can come from a tuning

fork, a guitar string, the column of air in an organ pipe, the head (or rim) of a snare drum, steam escaping from a

radiator, the reed on a clarinet, the diaphragm of a loudspeaker, the vocal cords, or virtually anything that vibrates in

a frequency range that is audible to a listener (roughly 20 to 20,000 cycles per second for humans). The two

conditions that are required for the generation of a sound wave are a vibratory disturbance and an elastic medium,

the most familiar of which is air. We will begin by describing the characteristics of vibrating objects, and then see

what happens when vibratory motion occurs in an elastic medium such as air. We can begin by examining a simple

vibrating object such as the one shown in Figure 3-1. If we set this object into vibration by tapping it from the

bottom, the bar will begin an upward and downward oscillation until the internal resistance of the bar causes the

The graph to the right of Figure 3-1 is a visual representation of the upward and downward motion of the bar.

To see how this graph is created, imagine that we use a strobe light to take a series of snapshots of the bar as it

vibrates up and down. For each snapshot, we measure the instantaneous displacement of the bar, which is the

rest. The rest position of the bar is arbitrarily given a displacement of zero; positive numbers are used for

the first snapshot, taken just as the bar is struck, will show an instantaneous displacement of zero; the next snapshot

pattern that is traced out has a very specific shape to it. The type of vibratory motion that is produced by a simple

vibratory system of this kind is called simple harmonic motion or uniform circular motion, and the pattern that is

traced out in the graph is called a sine wave or a sinusoid.

The Figure above: A bar is fixed at one and is set into vibration by tapping it from the bottom. Imagine that

a strobe light is used to take a series of snapshots of the bar as it vibrates up and down. At each

particular instant in time. Positive numbers signify displacements that are above the rest position,

while negative numbers signify displacements that are below the rest position. The vibratory pattern

that is traced out when the sequence of displacements is graphed is called a sinusoid.

We are now in a position to define some of the basic terminology that applies to sinusoidal vibration.

periodic: The vibratory pattern in Figure 3-1, and the waveform that is shown in the graph, are examples of

periodic vibration, which simply means that there is a pattern that repeats itself over time.

cycle: Cycle refers to one repetition of the pattern. The instantaneous displacement waveform in Figure 3-1 shows

four cycles, or four repetitions of the pattern.

period: Period is the time required to complete one cycle of vibration. For example, if 20 cycles are completed in 1

measurement for period is the millisecond (ms):

A somewhat less commonly used unit is the microsecond (μs):

How to transfer airtime on Etisalat (9Mobile)?