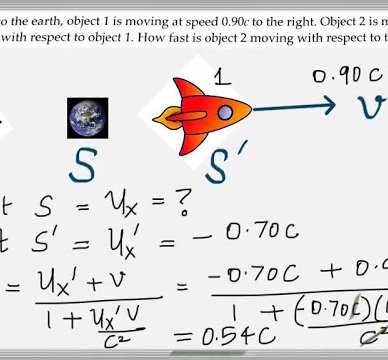 NOW in practice we can move clocks and measuring rods only with velocities that are small compared with the velocity of light; hence we shall hardly be able to compare the results of the previous section directly with the reality. But, on the other hand, these results must strike you as being very singular, and for that reason I shall now draw another conclusion from the theory, one which can easily be derived from the foregoing considerations, and which has been most elegantly confirmed by experiment.

On this point we are enlightened by a most important experiment which the brilliant physicist Fizeau performed more than half a century ago, and which has been repeated since then by some of the best experimental physicists, so that there can be no doubt about its result. The experiment is concerned with the following question. Light travels in a motionless liquid with a particular velocity w. How quickly does it travel in the direction of the arrow in the tube T (see the accompanying diagram, Fig. 3) when the liquid above mentioned is flowing through the tube with a velocity v?

It is clear that we have the problem of THE THEOREM OF THE ADDITION OF VELOCITIES EMPLOYED IN CLASSICAL MECHANICS again before us.The tube plays the part of the railway embankment or of the coordinate system K, the liquid plays the part of the carriage or of the coordinate system K, and finally, the light plays the part of the man walking along the carriage, or of the moving point. If we denote the velocity of the light relative to the tube by W, then this is given by the equation (A) or (B), according as the Galilei transformation or the Lorentz transformation corresponds to the facts. Experiment 1 decides in favour of equation (B) derived from the theory of relativity, and the agreement is, indeed, very exact. According to recent and most excellent measurements by Zeeman, the influence of the velocity of flow v on the propagation of light is represented by formula (B) to within one per cent.

An Introduction to Chaos Theory with the Lorenz Attractor