THE EXPANSION OF THE UNIVERSE 2 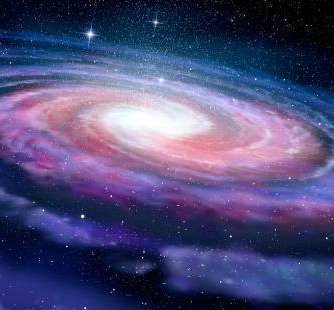 THE EXPANSION OF THE UNIVERSE PART TWO

In 1868 Sir William Huggins was able to show that the dark lines in the spectra of some of the brighter stars are shifted slightly to the red or the blue from their normal position in the spectrum of the sun. He correctly interpreted this as a Doppler shift, due to the motion of the star away from or toward the earth. For instance, the wavelength of every dark line in the spectrum of the star Capella is longer than the wavelength of the corresponding dark line in the spectrum of the sun by 0.01 percent; this shift to the red indicates that Capella is receding from us at 0.01 percent of the speed of light, or 30 kilometers per second. The Doppler effect was used in the following decades to discover the velocities of solar prominences, of double stars, and of the rings of Saturn. The measurement of velocities by the observation of Doppler shifts is an intrinsically accurate technique, because the wavelengths of spectral lines can be measured with very great precision; it is not unusual to find wavelengths given in tables to eight significant figures. Also, the technique preserves its accuracy whatever the distance of the light source, provided only that there is enough light to pick out spectral lines against the radiation of the night sky.

It is through use of the Doppler effect that we know the typical values of stellar velocities referred to at the beginning of this chapter. The Doppler effect also gives us a clue to the distances of nearby stars; if we guess something about a star's direction of motion, then the Doppler shift gives us its speed across as well as along our line of sight, so measurement of the star's apparent motion across the celestial sphere tells us how far away it is. But the Doppler effect began to give results of cosmological importance only when astronomers began to study the spectra of objects at a much greater distance than the visible stars. I will have to say a bit about the discovery of those objects and then come back to the Doppler effect.

We started this chapter with a look at the night sky. In addition to the moon, planets, and stars, there are two other visible objects, of greater cosmological importance, that I might have mentioned. One of these is so conspicuous and brilliant that it is sometimes visible even through the haze of a city's night sky. It is the band of lights stretching in a great circle across the celestial sphere, and known from ancient times as the Milky Way. In 1750 the English instrument maker Thomas Wright published a remarkable book, Original Theory or New Hypothesis of the Universe, in which he suggested that the stars lie in a flat slab, a "grindstone," of finite thickness but extending to great distances in all directions in the plane of the slab. The solar system lies within the slab, so naturally we see much more light when we look out from earth along the plane of the slab than when we look in any other direction. This is what we see as the Milky Way.

Wright's theory has long since been confirmed. It is now thought that the Milky Way consists of a flat disk of stars, with a diameter of 80,000 light years and a thickness of 6,000 light years. It also possesses a spherical halo of stars, with a diameter of almost 100,000 light years. The total mass is usually estimated as about 100 thousand million solar masses, but some astronomers think there may be a good deal more mass in an extended halo. The solar system is some 30,000 light years from the center of the disk, and slightly "north" of the central plane of the disk. The disk rotates, with speeds ranging up to about 250 kilometers per second, and exhibits giant spiral arms. Altogether a glorious sight, if only we could see it from outside! The whole system is usually now called the Galaxy, or, taking a larger view, "our galaxy."

The other of the cosmological interesting features of the night sky is much less obvious than the Milky Way. In the constellation Andromeda there is a hazy patch, not easy to see but clearly visible on a good night if you know where to look for it. The first written mention of this object appears to be a listing in the Book of the Fixed Stars, compiled in a,d. 964 by the Persian astronomer Abdurrahman Al-Sufi. He described it as a "little cloud." After telescopes became available, more and more such extended objects were discovered, and astronomers in the seventeenth and eighteenth centuries found that these objects were getting in the way of the search for things that seemed really interesting, the comets. In order to provide a convenient list of objects not to look at while hunting for comets, Charles Messier in 1781 published a celebrated catalog, Nebulae and Star Clusters. Astronomers still refer to the 103 objects in this catalog by their Messier numbers—thus the Andromeda Nebula is M31, the Crab Nebula is Ml, and so on.

Even in Messier's time it was clear that these extended objects are not all the same. Some are obviously clusters of stars, like the Pleiades (M45). Others are irregular clouds of glowing gas, often colored, and often associated with one or more stars, like the Giant Nebula in Orion (M42). Today we know that objects of these two types are within our galaxy, and they need not concern us further here. However, about a third of the objects in Messier's catalog were white nebulae of a fairly regular elliptical shape, of which the most prominent was the Andromeda Nebula (M31). As telescopes improved, thousands more of these were found, and by the end of the nineteenth century spiral arms had been identified in some, including M31 and M33. However, the best telescopes of the eighteenth and nineteenth centuries were unable to resolve the elliptical or spiral nebulae into stars, and their nature remained in doubt.It seems to have been Immanuel Kant who first proposed that some of the nebulae are galaxies like our own. Picking up Wright's theory of the Milky Way, Kant in 1755 in his Universe?/ Natural History and Theory of the Heavens suggested that the nebulae "or rather a species of them" are really circular disks about the same size and shape as our own galaxy. They appear elliptical because most of them are viewed at a slant, and of course they are faint because they are so far away.

The idea of a universe filled with galaxies like our own became widely though by no means universally accepted by the beginning of the nineteenth century. However, it remained an open possibility that these elliptical and spiral nebulae might prove to be mere clouds within our own galaxy, like other objects in Messier's catalog. One great source of confusion was the observation of exploding stars in some of the spiral nebulae. If these nebulae were really independent galaxies, too far away for us to pick out individual stars, then the explosions would have to be incredibly powerful to be so bright at such a great distance. In this connection, I cannot resist quoting one example of nineteenth-century scientific prose at its ripest. Writing in 1893, the English historian of astronomy Agnes Mary Clerke remarked:

The well known nebula in Andromeda, and the great spiral in Canes Venatici are among the more remarkable of those giving a continuous spectrum; and as a general rule, the emissions of all such nebulae as present the appearance of star-clusters grown misty through excessive distance, are of the same kind. Ft would, however, be eminently rash to conclude thence that they are really aggregations of such sun-like bodies. The improbability of such an inference has been greatly enhanced by the occurrence, at an interval of a quarter of a century, of stellar outbursts in two of them. For it is practically certain that, however distant the nebulae, the stars were equally remote; hence, if the constituent particles of the former be suns, the incomparably vaster orbs by which their feeble light was well-nigh obliterated must, as was argued by Mr. Proctor, have been on a scale of magnitude such as the imagination recoils from contemplating.

Today we know that these stellar outbursts were indeed "on a scale of magnitude such as the imagination recoils from contemplating." They were supernovas, explosions in which one star approaches the luminosity of a whole galaxy. But this was not known in 1893.

THE EXPANSION OF THE UNIVERSE 1