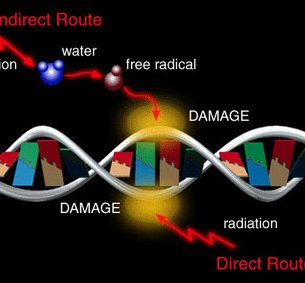 (To forestall objections from experts, I should mention that radio engineers often describe the intensity of radio noise in terms of a so-called antenna temperature, which is slightly different from the "equivalent temperature" described above. For the wavelengths and intensities observed by Penzias and Wilson, the two definitions are virtually identical.)

Penzias and Wilson found that the equivalent temperature of the radio noise they were receiving was about 3.5 degrees Centigrade above absolute zero (or more accurately, between 2.5 and 4.5 degrees above absolute zero). Temperatures measured on the Centigrade scale, but referred to absolute zero rather than the melting point of ice, are reported in "degrees Kelvin." Thus, the radio noise observed by Penzias and Wilson could be described as having an "equivalent temperature" of 3.5 degrees Kelvin, or 3.5° K for short. This was much greater than expected, but still very low in absolute terms, so it is not surprising that Penzias and Wilson brooded over their result for a while before publishing it. It certainly was not immediately clear that this was the most important cosmological advance since the discovery of the red shifts.

The meaning of the mysterious microwave noise soon began to be clarified through the operation of the "invisible college" of astrophysicists. Penzias happened to telephone a fellow radio astronomer, Bernard Burke of M.I.T., about other matters. Burke had just heard from yet another colleague, Ken Turner of the Carnegie Institution, of a talk that Turner had in turn heard at Johns Hopkins, given by a young theorist from Princeton, P. ). E. Peebles. In this talk Peebles argued that there ought to be a background of radio noise left over from the early universe, with a present equivalent temperature of roughly 10° K. Burke already knew that Penzias was measuring radio noise temperatures with the Bell Laboratories horn antenna, so he took the occasion of the telephone conversation to ask how the measurements were going. Penzias said that the measurements were going fine, but that there was something about the results he didn't understand. Burke suggested to Penzias that the physicists at Princeton might have some interesting ideas on what it was that his antenna was receiving.

In his talk, and in a preprint written in March 1965, Peebles had considered the radiation that might have been present in the early universe. "Radiation" is of course a general term, encompassing electromagnetic waves of all wavelengths—not only radio waves, but infrared light, visible light, ultraviolet light, X rays, and the very short-wavelength radiation called gamma rays. There are no sharp distinctions; with changing wavelength one kind of radiation blends gradually into another. Peebles noted that if there had not been an intense background of radiation present during the first few minutes of the universe, nuclear reactions would have proceeded so rapidly that a large fraction of the hydrogen present would have been "cooked" into heavier elements, in contradiction with the fact that about three-quarters of the present universe is hydrogen. This rapid nuclear cooking could have been prevented only if the universe was filled with radiation having an enormous equivalent temperature at very short wavelengths, which could blast nuclei apart as fast as they could be formed.

Peebles' work was only the latest in a long series of similar cosmological speculations. In fact, in the late 1940s a "big bang" theory of nucleosynthesis had been developed by George Gamow and his collaborators, Ralph Alpher and Robert Herman, and was used in 1948 by Alpher and Herman to predict a radiation background with a present temperature of about 5° K. Similar calculations were carried out in 1964 by Ya. B. Zeldovich in Russia and independently by Fred Hoyle and R. J. Tayler in England. This earlier work was not at first known to the groups at Bell Laboratories and Princeton, and it did not have an effect on the actual discovery of the radiation background.

Peebles' 1965 calculation had been instigated by the ideas of a senior experimental physicist at Princeton, Robert H. Dicke. (Among other things, Dicke had invented some of the key microwave techniques used by radio astronomers.) Sometime in 1964 Dicke had begun to wonder whether there might not be some observable radiation left over from a hot dense early stage of cosmic history. Dicke's speculations were based on an "oscillating" theory of the universe, to which we will return in the last chapter of this book. He apparently did not have a definite expectation of the temperature of this radiation, but he did appreciate the essential point, that there was something worth looking for. Dicke suggested to P. G. Roll and D. T. Wilkinson that they mount a search for a microwave radiation

background, and they began to set up a small low-noise antenna on the roof of the Palmer Physical Laboratory at Princeton. (It is not necessary to use a large radio telescope for this purpose because the radiation comes from all directions, so that nothing is gained by having a more tightly focused antenna beam.)