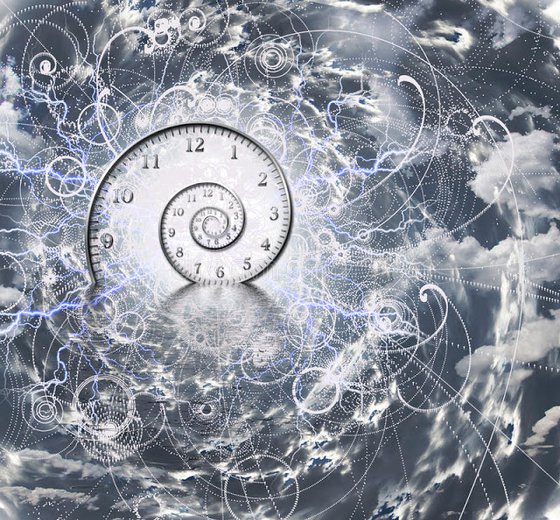 THE FIRST ONE-HUNDREDTH SECOND BY STEVEN WEINBERG PART ONE

Naturally, it is tempting to try to peek behind this veil. The temptation is particularly strong for theorists like myself, whose work has been much more in elementary particle physics than in astrophysics. Many of the interesting ideas in contemporary particle physics have such subtle consequences that they are extraordinarily difficult to test in laboratories today, but their consequences are quite dramatic when these ideas are applied to the very early universe.

It is the strength of the strong interactions that makes them so much more difficult to deal with mathematically than the electromagnetic interactions. When, for instance, we calculate the rate for scattering of two electrons due to the electromagnetic repulsion between them, we must add up an infinite number of contributions, each corresponding to a particular sequence of emission and absorption of photons and electron-positron pairs, symbolized in a "Feynman diagram" like those of figure 10, (The method of calculation that uses these diagrams was worked out in the late 1940s by Richard Feynman, then at Cornell. Strictly speaking, the rate for the scattering process is given by the square of a sum of contributions, one for each diagram.) Adding one more internal line to any diagram lowers the contribution of the diagram by a factor roughly equal to a fundamental constant of nature, known as the "fine structure constant." This constant is quite small, about 1/157.036. Complicated diagrams therefore give small contributions, and we can calculate the rate of the scattering process to an adequate approximation by adding up the contributions from just a few simple diagrams. (This is why we feel confident that we can predict atomic spectra with almost unlimited precision.) However, for the strong interactions, the constant that plays the role of the fine structure constant is roughly equal to one, not 1/157, and complicated diagrams therefore make just as large a contribution as simple diagrams. This problem, the difficulty of calculating rates for processes involving strong interactions, has been the single greatest obstacle to progress in elementary particle physics for the last quarter-century.

Not all processes involve strong interactions. The strong interactions affect only a class of particles known as "hadrons"; these include the nuclear particles and pi mesons, and other unstable particles known as K-mesons, eta mesons, lambda hyperons, sigma hyperons, and so on. The hadrons are generally heavier than the leptons (the name "lepton" is taken from the Greek word for "light"), but the really important difference between them is that hadrons feel the effects of the strong interactions, while the leptons—the neutrinos, electrons, and muons—do not. The fact that electrons do not feel the nuclear force is overwhelmingly important—together with the small mass of the electron, it is responsible for the fact that the cloud of electrons in an atom or a molecule is about 100,000 times larger than the atomic nuclei, and also that the chemical forces which hold atoms together in molecules are millions of times weaker than the forces which hold neutrons and protons together in nuclei. If the electrons in atoms and molecules felt the nuclear force, there would be no chemistry or crystallography or biology—only nuclear physics.

The temperature of 100,000 million degrees Kelvin, with which we began in Chapter V, was carefully chosen to be below the threshold temperature for all hadrons. (According to Table One on p. 156, the lightest hadron, the pi meson, has a threshold temperature of about 1.6 million million degrees Kelvin.) Thus, throughout the story told in Chapter V, the only particles present in large numbers were leptons and photons, and the interactions among them could safely be ignored. How do we deal with higher temperatures, when hadrons and antihadrons would have been present in large numbers? There are two very different answers which reflect two very different schools of thought as to the nature of the hadrons.

According to one school, there really is no such thing as an "elementary" hadron. Every hadron is as fundamental as every other—not only stable and nearly stable hadrons like the proton and neutron, and not only moderately unstable particles like the pi mesons, K-mesons, eta meson, and hyperons, which live long enough to leave measurable tracks in photographic films or bubble chambers, but even totally unstable "particles" like the rho mesons, which live just long enough so that at a speed near that of light they can barely cross an atomic nucleus. This doctrine was developed in the late 1950s and early 1960s, particularly by Geoffrey Chew of Berkeley, and is sometimes known as "nuclear democracy."

With such a liberal definition of "hadron," there are literally hundreds of known hadrons whose threshold temperature is less than 100 million million degrees Kelvin, and probably hundreds more yet to be discovered. In some theories there is an unlimited number of species: the number of types of particles will increase faster and faster as we explore higher and higher masses. It might seem hopeless to try to make sense out of such a world, but the very complexity of the particle spectrum might lead to a kind of simplicity. For instance, the rhomeson is a hadron that can be thought of as an unstable composite of two pi mesons; when we include rho mesons explicitly in our calculations, we are already to some extent taking account of the strong interaction between pi mesons; perhaps by including all hadrons explicitly in our thermodynamic calculations, we can ignore all other effects of the strong interactions.

Further, if there really is an unlimited number of species of hadron, then when we put more and more energy in a given volume the energy does not go into increasing the random speeds of the particles, but goes instead into increasing the numbers of types of particles present in the volume. The temperature then does not go up as fast with increasing energy density as it would if the number of hadron species were fixed. In fact, in such theories there can be a maximum temperature,

a value of the temperature at which the energy density becomes infinite. This would be as insuperable an upper bound on the temperature as absolute zero is a lower bound. The idea of a maximum temperature in hadron physics is originally due to R. Hagedorn of the CERN laboratory in Geneva, and has been further developed by other theorists, including Kerson Huang of M. I. T. and myself. There is even a fairly precise estimate of what the maximum temperature would be—it is surprisingly low, about two million million degrees Kelvin (2x101* ° K). As we look closer and closer to the beginning, the temperature would grow closer and closer to this maximum, and the variety of hadron types present would grow richer and richer.

There is another school of thought that is far more conventional, far closer to ordinary intuition than "nuclear democracy," and in my opinion also closer to the truth. According to this school, not all particles are equal; some really are elementary, and all the others are mere composites of the elementary particles. The elementary particles are thought to consist of the photon and all the known leptons, but none of the known hadrons. Rather, the hadrons are supposed to be composites of more fundamental particles, known as "quarks."

The original version of the quark theory is due to Munay Gell-Mann and (independently) George Zweig, both of Cal Tech. The poetic imagination of theoretical physicists has really run wild in naming the different sorts of quarks. The quarks come in different types, or "flavors," which are given

names like "up," "down," "strange," and "charmed." Furthermore, each "flavor" of quark comes in three distinct "colors," which U.S. theorists usually call red, white, and blue. The small group of theoretical physicists in Peking has long favored a version of the quark theory, but they call them "stratons" instead of quarks because these particles represent a deeper stratum of reality than the ordinary hadrons.

If the quark idea is right, then the physics of the very early universe may be simpler than was thought. It is possible to infer something about the forces between quarks from their spatial distribution inside a nuclear particle, and this distribution can in turn be determined (if the quark model is true) from observations of high-energy collisions of electrons with nuclear particles. In this way, it was found a few years ago by an M.I.T.-Stanford Linear Accelerator Center collaboration that the force between quarks seems to disappear when the quarks are very close to each other. This suggests that at some temperature, around several million million degrees Kelvin, the hadrons would simply break up into their constituent quarks, just as atoms break up into electrons and nuclei at a few thousand degrees, and nuclei break up into protons and neutrons at a few thousand million degrees. According to this picture, at very early times the universe could be considered to consist of photons, leptons, antileptons, quarks, and an-tiquarks, all moving essentially as free particles, and each particle species therefore in effect furnishing just one more kind of black-body radiation. It is easy then to calculate that there must have been a beginning, a state of infinite density and infinite temperature, about one-hundredth of a second before the first frame.

A HISTORICAL DIVERSION BY STEVEN WEINBERG 2